On the seabed off the East Coast of North America, researchers have found black and hard small glass beads. These indicate that a celestial body hit the Earth 56 million years ago, about 10 million years after the big mass extinction of the dinosaurs.

It is known that the Earth underwent massive climate change some 56 million years ago. The cause of this was thought to have been mainly due to volcanic activity in the North Atlantic, a tectonic process during which North America, Greenland, and Scandinavia split into separate landmasses.

The heat from the magma implied that enormous amounts of organic material was released, which in turn heated the Earth’s climate up to 8 degrees Celsius warmer than it is today. This warm period, known as the Paleocene-Eocene Thermal Maximum (PETM), is often cited as the closest analog to today’s rapid human-induced climate change

Now a U.S. research team discovered that not only was there volcanic activity during this period – the Earth also seems to have been struck by an extraterrestrial celestial body, a meteorite or perhaps a comet.

Rensselaer Polytechnic Institute geochemist Dr. Morgan Schaller and co-authors found what looks like small drops of glass in the sediments, these are evidence of an impact, as these tiny spherical droplets of glass called microtektites can only be formed at a temperature of about 1,750 degrees Celsius. But since the heat generated from volcanic activity cannot reach these temperatures, they must have instead have been formed in some sort of collision. 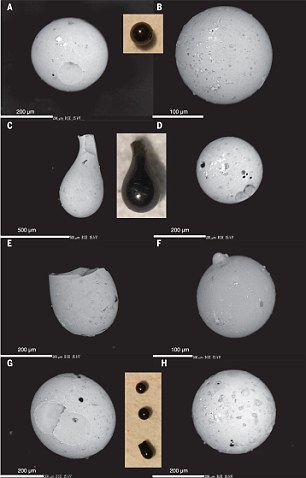 With more research, the scientists hope to determine where the impact took place and how large the celestial body was. The scientists found the evidence of an impact along the New Jersey coast but note “It could have been next door, or it could have been on the other side of the planet,”. The spherules are thinly spread, according to Schaller, which suggests that either the impact was large but far away, or close, but relatively small.

Once the impact crater has been found, it will hopefully give us a better picture of how often the Earth is hit and what the consequences of this particular hit might have been. Without knowing where it struck and how large it was, it is very difficult to say whether and how it may have affected the climate at the time.

The research is presented in a paper published online this week in the journal Science.