In recent times with elections in Greece, there have been new talks on the possibility of Greece leaving the Eurozone. The rationale behind this logic would be that Greece cannot remain competitive given the higher valued Euro compared to a hypothetical domestic currency. A reintroduced lower-valued Greek Drachma would be more adapted to domestic monetary, fiscal and structural conditions.

The competitive disadvantage is pointed out to slow down economic recovery and thereby also making any repayments on loans both slower and more difficult. It is also often pointed out that Greece fundamental economic problem is productivity and its terms of trade on a global market, simply put, real wages and prices are too high.

Economic theory describes how instead of leaving the Euro and devaluing a domestic currency, Greece could undergo an internal devaluation via falling real wages. It is indeed a costly reform but is considered as an alternative to ‘standard’ external devaluation, although social implications and speed of economic recovery may significantly differ between the two options.

Internal devaluation was first considered during the Swedish economic crisis during the early 1990s and Finland’s accession to the European Union in 1995. Academic research has been lacking though and has only started to appear after 2012 with qualitative observations of real-world examples provided by countries implementing internal devaluation after the economic crises of 2008.

Greece is one of those countries, and an undeniable great social costs (approximately 2.5 million Greeks are living below the poverty line, while 3.8 million are in direct danger of crossing the poverty line, according to a new report), the country has actually also achieved a sharp fall in relative wages as seen by the Eurostat statistics below. 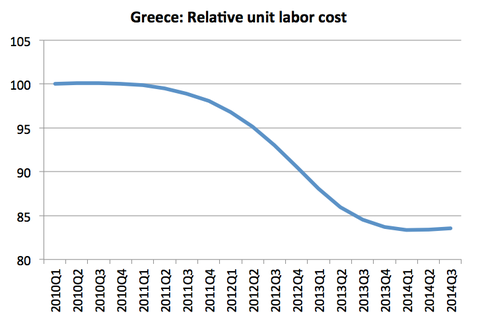 It is a quite remarkable reduction in relative wages and this fact should indeed be relevant for a discussion on a possible Grexit. But even if competitiveness is the main factor when evaluating a possible exit it is certainly not the only factor. With prestige, politics och stability as well as Greek banks possibly being dependent on the availability of a lender of last resort.

But if the creditors of Greece see an internal devaluation as a necessary means of increasing Greek exports and pushing the economy towards a return to economic growth. The outcome is quite the opposite. Even if Greece has achieved a primary surplus of GDP equal to about 3-5 %. This has been achieved at a great cost of a 25% decline in GDP.

At present, cutting wages and implementing austerity measures have made the country able to take in the air holding its head above the water surface. But this desperate situation can only last for so long and once it goes under the surface, it will undoubtedly drown. Since a smaller and smaller economy only makes every additional loan given by its creditors relatively more expensive.