Is Greece Leaving the Euro? 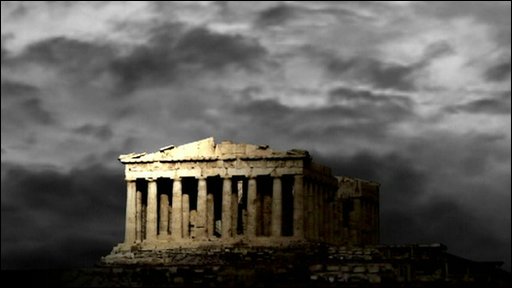 Ever since the problems of Greece first emerged, the possibility and probability of Greece leaving the EMU have been discussed. And the discussion has occasionally been widened to include all of the heavily indebted countries in the EMU; Italy, Spain, Portugal, and even Ireland.

The idea then would be for Greece to leave the Eurozone and the common currency, to allow devaluation, helping them to;

When a nation’s debt is in its own currency, a devaluation lowers the real value of the debt owned externally, however, the currency of Greece’s debt is in Euros, thereby a devaluation would have zero effect on the debt directly. However, the possibility exists for Greece, after hypothetically leaving the EMU, to denominate their debt to a domestic currency, presumably the “drachma”, and thereby enabling the possibility to reduce the debt.

Devaluation does affect terms-of-trade in a positive way by lowering the price of Greek exports and raising the price of imports, thereby allowing them to export out of recession. This will bring give a fiscal boost. It is a well-known phenomenon and was often used in Sweden during the 20t century, until the 1990s when Sweden abandoned the fixed currency to counter speculative attacks (leading to a repo rate of 500 % for a very short time) and high expectations of further devaluations, which proved wise, with a very low inflation rate since.

A currency devaluation after exit would, however, increase inflation and the burning question is if hyperinflation would follow. Greece is running a cyclically adjusted primary surplus, so a devaluation would, other things equal, actually promote recovery.

But there is actually another way to mimic a currency devaluation, by an Internal devaluation, a “fiscal devaluation” as shown by recent research. Raising value-added-taxes in the economy and accompanying this increase with a uniform payroll tax reduction. Raising VAT will increase the price of imported food (foreign firms face a higher tax), but also lowering exports prices by exemption from the tax – thereby improving terms-of-trade.