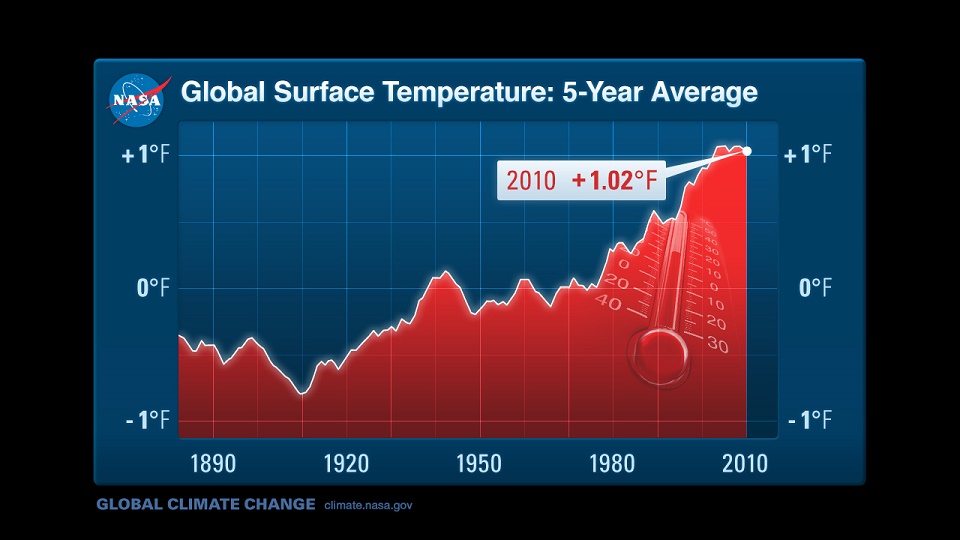 According to a new study at the Stanford University, climate change could occur 10 times faster than it has occurred for the past 65 million years.

The Stanford scientists Noah Diffenbaugh and Chris Field warns that Earth is going through not only the largest but also the fastest climate change since the dinosaurs went extinct – 10 times faster than any other climate change during this period.

The speed of change is very important since it is crucial for adaptation. Since a slow and gradual change would possibly permit behavioral changes, geographical allocation, and even evolutionary changes. But a fast change does not, even if the end result is the same with both.

Without any intervention, this fast change could lead to a 5 to 6 degrees Celsius higher annual mean temperatures by the end of the century.

When Earth emerged from the last ice age, some 20,000 years ago, there was an increase in mean temperatures by 5 degrees. This climate transition is thereby comparable to the change that is projected for the next 100 years.

The now published study is a review study doing a broad review of scientific literature on aspects of climate change that can affect ecosystems. Published in Science by climate researcher and professor Noah Diffenbaugh and Chris Field, professor of biology and director of the Department of Global Ecology at the Carnegie Institution.

Diffenbaugh writes, “We know from past changes that ecosystems have responded to a few degrees of global temperature change over thousands of years,”. “But the unprecedented trajectory that we’re on now is forcing that change to occur over decades. That’s orders of magnitude faster, and we’re already seeing that some species are challenged by that rate of change.”

A higher mean temperature implies higher extreme temperatures, heat waves, less rain in large areas, more in others, rain instead of snow during wintertime, the extreme weather would be more common with more energy in motion.

As glaciers, the Arctic, Greenland, and Antarctica melts, sea levels rise due to more water in our oceans instead of not resting on land. A higher water temperature also make it expand.

The fossil fuels we burn today has once been a part of the ecosystem on Earth, although accumulated over time. This fact implies that there was once more carbon in circulation (carbon cycle) and paleoclimate studies confirm that 55 million years ago the carbon dioxide levels were elevated to levels comparable to the levels of today or the near future.

Animal and Vegetation Adaptation: Is it Possible?

The scientists aimed to define the distance per year that species of plants and animals would need to migrate to live in annual temperatures similar to present conditions.

Just as animals and plants were to adapt or die during the end of the last ice age. The scientists note that species around the world will face a similar transition again. Many plants and animals will need to move towards the poles or higher up in the mountains by at least one kilometer per year if they are to adapt to changing climate zones.

Likeliness of a Worst Case Scenario

Some of the changes in temperature are unavoidable since humans have already emitted greenhouse gasses into the atmosphere, that will continue to warm the planet even if we stop tomorrow.

As Diffenbaugh writes; “If every new power plant or factory in the world produced zero emissions, we’d still see an impact from the existing infrastructure, and from gasses already released.”

A worst case scenario would however only happen if we do not dramatically stop emitting green house gases.

Giant Panda Blood: A Weapon in the War Against Resistant Bacteria?
Increased Longevity With Omega-3?