Should everyone eat a gluten-free diet? 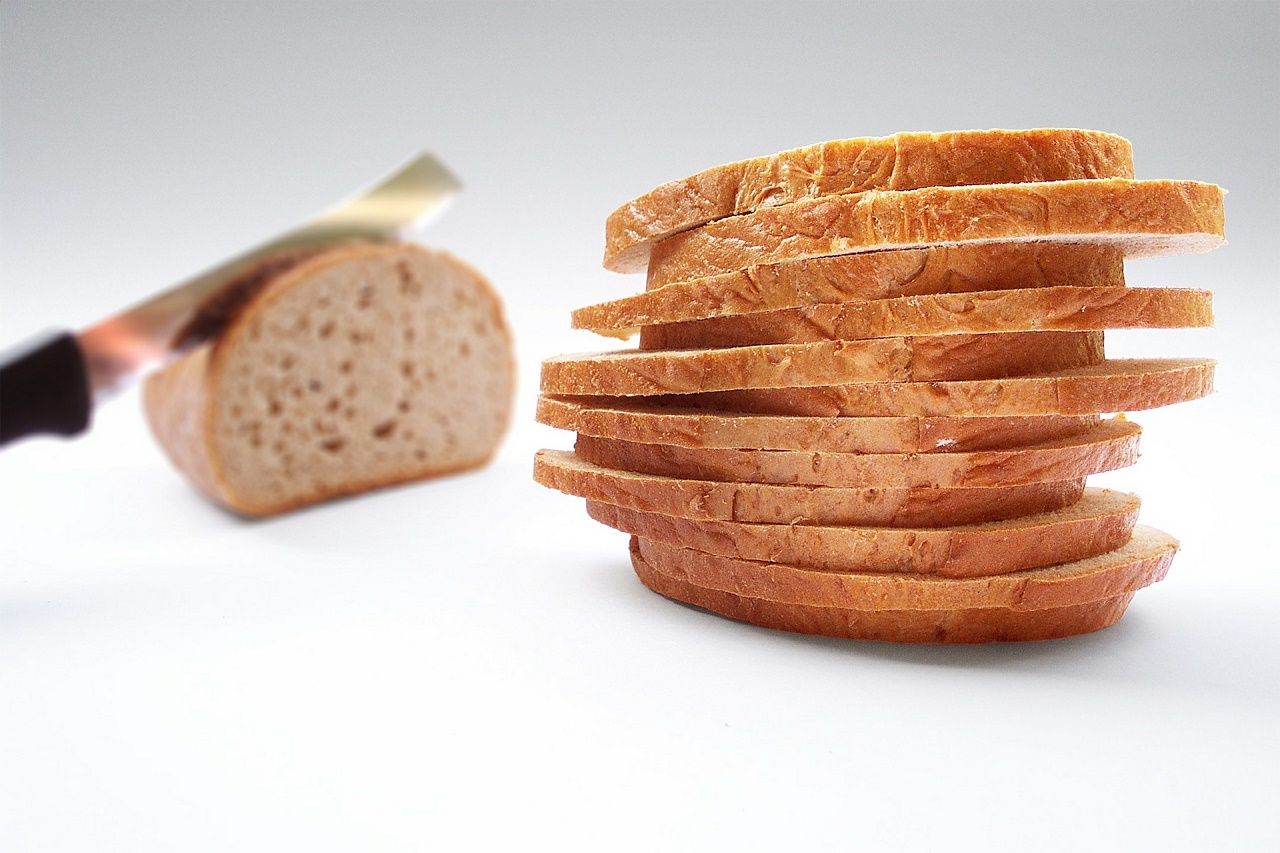 Today many are considering cutting back on the amount of gluten in their diets or avoiding it altogether. But is a gluten-free diet really a good idea if you do not have an intolerance to wheat, barley or rye?

Gluten free is often perceived as a diet for weight loss and health. But are gluten-free products really automatically healthier than products that contain gluten?

Gluten is a protein found in many grains, particularly in wheat, barley, and rye. About 1% of the population in the US and Western Europe has celiac disease. A recent study found it to be equally as common in Northern Europe, Australasia, North America and the Middle East but thought to be less common in the Orient and Sub-Saharan Africa (J. Y. Kang et al).

Celiac disease is an autoimmune disorder affecting primarily the small intestine. Those affected suffer severe symptoms if they were to eat gluten. Inflammation of the small interstice which results in malabsorption of nutrients. The undiagnosed celiac disease often causes stomach problems such as diarrhea or gas. But those who have celiac disease can also get very tired or lose weight and among children the failure to grow normally. Celiac disease cannot be cured, those who have the disease will need to live with it throughout his or her life, and must avoid gluten.

But today far more than those who have celiac disease avoid gluten, the number of Google searches for “Gluten Free” has grown significantly in the last ten years while the search term “Celiac Disease” has largely remained constant.

Gluten adds a certain texture to food. It gives elasticity to dough, helping it rise and keep its shape and often gives the final product a chewy texture. When you remove gluten, you need to offset a deterioration in texture, sometimes with more sugar and fat.

When bakers add water to wheat flour and begin to knead it into a dough, two smaller proteins—gliadin and glutenin—change shape and bind to each other, forming long, viscoelastic loops of what we call gluten. The more gluten in the flour, the more the dough will stretch, and the spongier it will be once baked. You can think of gluten as the rubber of a balloon; The stronger it is, the more gas it can hold. It holds the carbon dioxide gas produced by the yeast that makes the bread rise.

Some eat gluten free since they suffer from diffuse gastric problems and feel better when they exclude gluten. It is usually called “Nonceliac gluten sensitivity” (NCGS), or gluten sensitivity. There are people who feel they have symptoms similar to those seen in celiac disease, but there is no inflammation of the bowel or other biological explanations for the symptoms.

If “gluten sensitivity” really exists is still an ongoing discussion. A relatively new study (Di Sabatino A et al) on people who characterized themselves as gluten sensitive, that is – they suffer from eating gluten – but do not have celiac disease. The participants felt better when avoiding gluten but had all been medically examined and diagnosed to not having celiac disease.

The design of the study was very simple. A total of 61 participants were included in the study. They all had to eat a completely gluten-free diet for one week. Then they were randomly assigned capsules containing either gluten or rice starch. The participants were then taking these pills every day for a week while continuing to eat their gluten-free diet. After one week, there was a week of wash-out, then the participants who had been given gluten was given rice starch and vice versa, for another week.

Looking at the individual values in the graph below there is a very large spread indeed. The researchers found only three people who were significantly worse when receiving gluten pills. These participants did not have celiac disease (gluten intolerance) but clearly demonstrated adverse health effects. Those three can be seen marked below. 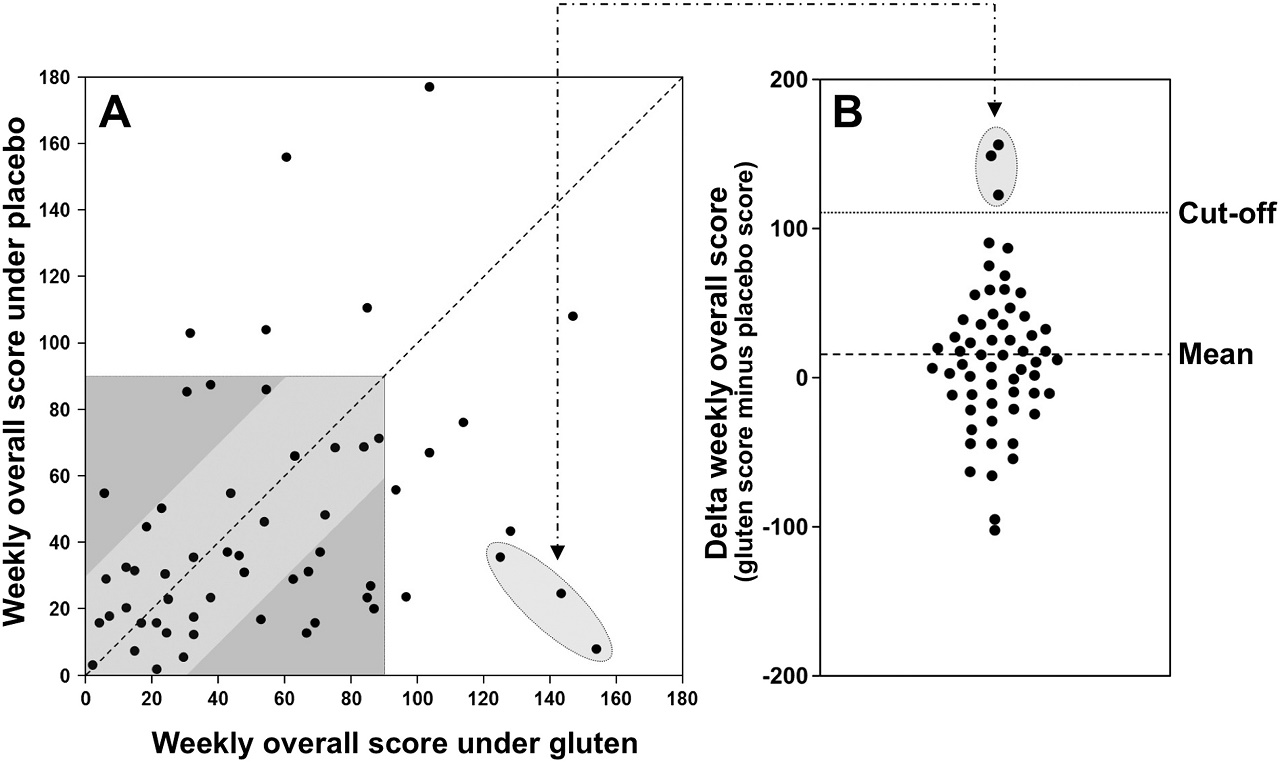 Another study (Imran Aziz et al) also indicate the existence of NCGS among self-reported NCGS. The double-blind placebo cross-over trial indicates that small amounts of purified wheat gluten triggered gastrointestinal symptoms (such as abdominal bloating and pain) and extra-intestinal manifestations (such as foggy mind, depression, and aphthous stomatitis). However, it remains elusive whether these findings specifically implicate gluten or proteins present in gluten-containing cereals.

There is scientific evidence that contradicts the two above studies, indicating a quite different result. A large Italian (Capannolo A et al) two-year study published last year, included nearly 400 people, all claiming to be gluten sensitive. It was done at the University of L’Aquila in Italy. All of the subjects were instructed to eat gluten-containing foods for two months before their initial diagnostic tests (blood tests and endoscopies, etc) to determine if they had celiac disease or a wheat allergy. They all then followed a gluten-free diet for six months. After this six-month period, those who did not test positive for celiac or wheat allergies were instructed to reintroduce gluten-containing foods and were then monitored for symptoms associated with gluten sensitivity.

Of the 392 patients, 6.63 percent tested positive for celiac disease and two individuals (.51 percent) for wheat allergy. Some 27 patients (6.88 percent) were found to suffer from non-celiac gluten sensitivity. Based on this, 86 percent of those who believe they’re sensitive to gluten can tolerate it without negative health consequences. And, when you account for those who had celiac or wheat allergy, some 93 percent of individuals who believe they are gluten-sensitive can tolerate it.

More and more athletes avoid gluten to perform better. A study (Lis DM et al) on Australian professional athletes showed that as many as 41 percents followed some kind of gluten-free diet. It seems that scientific evidence is, however, scant.

When Australian researchers put a group of elite cyclists on a gluten-free diet for one week, their performance was not better than it was during a week of eating foods containing wheat – according to the study (Lis D et al).

After one week, the cyclists did an exercise test and the researchers measured inflammation in the body. It turned out that there was no difference in the performance or inflammation of the cyclists who ate gluten and those eating gluten-free bars.

“There is no evidence to suggest that gluten removal itself is linked to improved health or performance outcomes,” lead study author Dana Lis, a health sciences researcher at the University of Tasmania.

The study was short and very small and says nothing about what the effect are (if any) if avoiding gluten for a longer period. But the results are in line with what other research shows.

There is a risk of delaying the diagnosis of another disease if you have stomach problems and begin to experiment on yourself with a gluten-free diet. It is probably a good idea, therefore, to make an appointment with a doctor if you suspect that you have celiac disease.

Gluten free is probably not a quick fix for weight loss or stomach problems. What makes many people feel better is perhaps instead because they avoid foods such as pizza, pasta and large quantities of bread. After all, “junk food” and fast food, often contain gluten.

Finally, it appears as if there is little evidence to suggest that gluten is bad for most people. But, there is no reason to eat gluten if you do not want to. If you want to try and exclude it from your diet, then try it. Those who replaces gluten products with healthy alternatives will most likely improve eating habits and very possibly their health.