An enthusiastic amateur archaeologist found a 1300-year-old figure on Odin. The finding also raises a question: Did the Vikings have horns on their helmets? 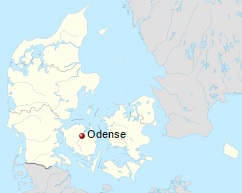 In late August, an enthusiastic Danish man using a metal detector made the discovery of a lifetime when he found a figure of the Norse god Odin.

He made his discovery while investigating an area nearby the village Mesinge, some 20 kilometers northeast of the city Odense, in Denmark.

As his metal detector started beeping, he began digging and found a small metal figure. When dusting it off, the discovery turned out to be a five-centimeter tall figure of a man with a big beard and semi-long hair.

On closer examination by experts, the figure was later established to be from the 700-century CE and represent the Norse god Odin.

The figure has been used as a fibula (buckle), which was used to hold together coats.

Perhaps the most remarkable part of the figure is its helmet with something that resembles horns. This particular detail is controversial since historians have long been convinced that Viking helmets did not have horns.

Archaeologists reason however that it is probably not a helmet, but a headgear (diadem) with attached horns that ended in birds or perhaps dragons.

Science Magazine: Humans aren’t the only great apes that can ‘read minds’
A trip to Mars could cause brain damage