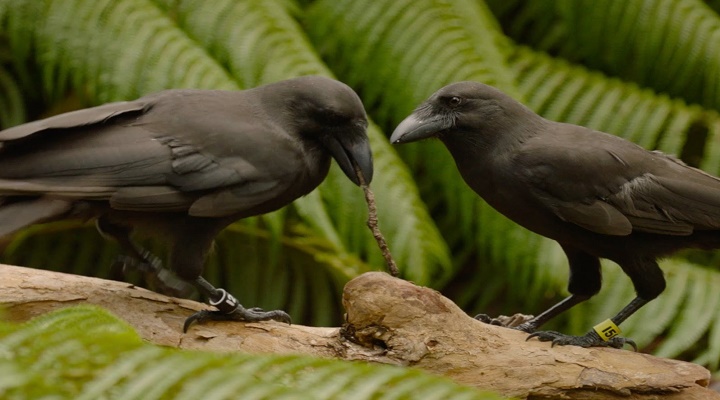 The Hawaiian crow ʻalalā (Corvus hawaiiensis) is the latest addition to the less than one percent of animal species in the world that use tools for their survival in the wild.

Like their cousins the New Caledonian crow (Corvus moneduloides) found on – not so surprising – the island of New Caledonia off Australia’s east coast, also have the capacity to use smaller twigs and sticks, digging up grubs from tree trunks.

Unlike other birds, such as ravens who could use tools if they really had to, it seems as if ʻalalā use tools for its continued survival.

One of the researchers behind the study, Christian Rutz, notes in a press release that the birds were given no special training, but even younger individuals managed to dig out insects with the help of sticks, although they had not seen other adults doing so.

There are only 133 individual birds remaining of the Hawaiian crow, breed on two of the Hawaiian Islands. There are no crows left in the wild, but a solid conservation project is in place and will soon see the first few birds released back into the wild to see how they fare.

The presence of humans on the islands hasn’t been easy on the bird species, previous persecution by humans and deforestation has taken its toll. With its chicks vulnerable to invasive species such as tree-climbing rats, then after they leave their nests, cats, dogs, and mongooses.

Perhaps it is not surprising that these Hawaiian crows are proven to be adept tool users, they have one thing in common with other tool-using bird species – they are island-dwellers.

Although the islands can be a disadvantage simply because there is less food, it can also be an advantage as there is less competition from other species for their niche source of food.

There are, for example, no woodpeckers on the island, which means that there are many fat and protein rich species of larvae available for the bird to dig out with sticks and eat.

The study ‘Discovery of species-wide tool use in the Hawaiian crow’ has been published in the scientific journal Nature.