Scientists have discovered a large gas planet in a solar system that is very peculiar. The exoplanet known as HD 131399Ab is four times as heavy as Jupiter and resides in a star system with three suns.

The planet’s orbit is very unusual. It is orbiting one star which takes it relatively close to the other two stars. It experiences either constant daylight or triple sunrises and sunsets depending on the seasons, which last longer than a human lifetime. Astronomers are now trying to figure out how the planet can remain in a stable orbit – and avoid being affected by the other stars.

The discovery was made by a team of researchers led by astronomers from the University of Arizona. Perhaps surprising is that the discovery was not made by using the Kepler Space Telescope. Instead, the astronomers detected the heat signature of the exoplanet thanks to the direct imaging capabilities of the Spectro-Polarimetric High-contrast Exoplanet Research instrument (SPHERE) equipment mounted on the ground-based telescope, the European Southern Observatory’s Very Large Telescope (VLT), in Chile. It is the first exoplanet to be discovered by SPHERE. 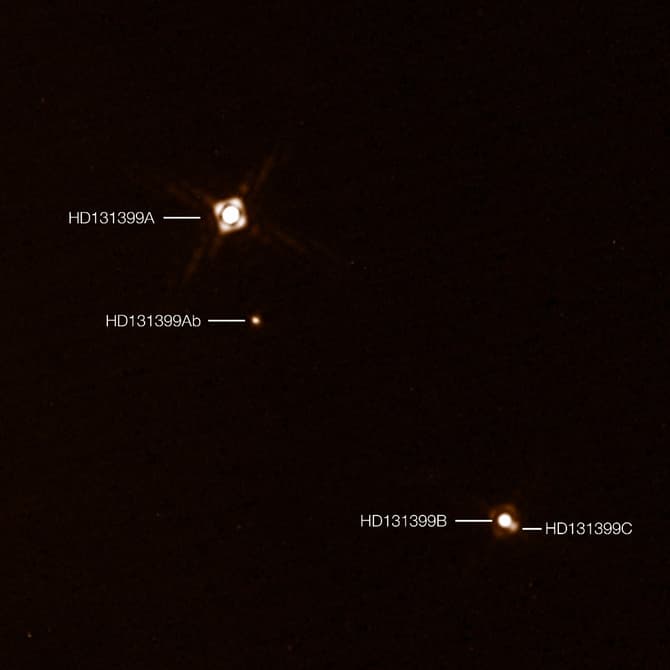 The star system is situated in the constellation of Centaurus some 320 light-years from Earth. HD 131399Ab is thought to be only 16 million years old which makes it one of the youngest exoplanets ever discovered. With a temperature of only 580 degrees Celsius (1,076 Fahrenheit) it also one of the coldest exoplanets to be directly imaged.

Balancing On A Knife Edge

Given the gravitational properties of the triple star system, it is likely that the stability of the exoplanet’s orbit rests on a knife edge. Any disturbance would probably result in complete chaos.

The team now plan to undertake further observations of the planet as well as the nature of its three parent stars. They hope to gain insights into how planetary formation may have occurred in so an extreme and unusual environment.

Click here to see an artist’s animated impression of a planet orbiting in the HD 131399 system. Two of the stars are close together and the third, brighter component is orbited by a gas giant planet named HD 131399Ab.

Multi-star systems are thought to be as common as single-star analogous like our own Solar System. The discovery of an exoplanet in a relatively stable orbit in such a star system is, however, a very rare occurrence according to the astronomers.

The paper Direct imaging discovery of a Jovian exoplanet within a triple-star system has been published in Science.

Increased Chances of Finding Life on the Trappist 1 Planets