Astronomers have spotted a bridge of radio emissions 10 million light-years long joining two galaxy clusters that are slowly colliding with each other.

The bridge stretches more than nine million light-years across and traces one of the filaments in the so-called cosmic web, the structure thought to describe the large-scale organization of the universe.

A team of astronomers led by Federica Govoni at the Italian National Institute for Astrophysics has discovered, for the first time, a “ridge” of plasma emitting radio waves and connecting two galaxy clusters in the process of merging: Abell 0399 and Abell 0401.

This ridge is part of the cosmic web along which galaxy clusters tend to gather, stretches for about 10 million light-years and shows evidence of both a magnetic field and relativistic particles — electrons moving at close to the speed of light. 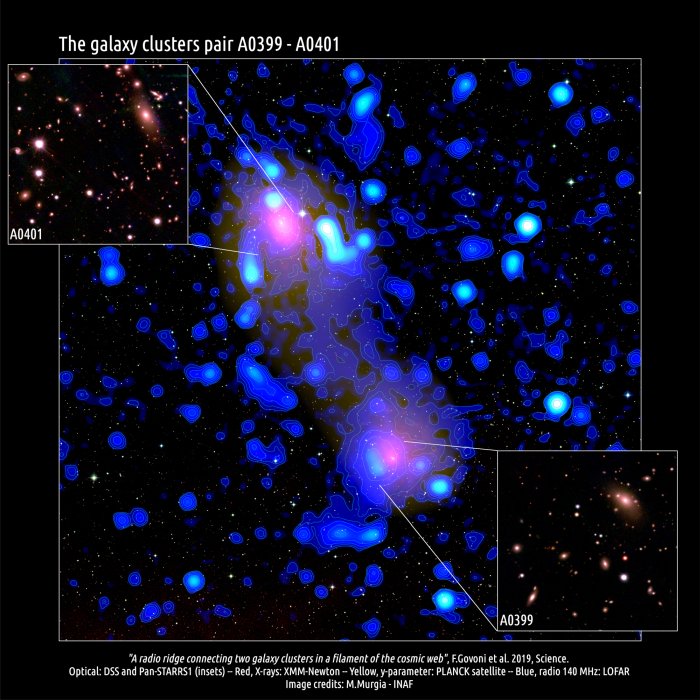 Researchers used the Low-Frequency Array telescope network to observe the two galaxy clusters. they found a strip of radio emissions extending for millions of light years. The presence of the emissions suggests that within the filament, there is a magnetic field and relativistic electrons—the structure is larger than any other models can account for.

Since electrons could only travel at relativistic speeds required for distances far shorter than the length of the filament. This fact, the researchers say, must mean that there is some unknown mechanism that re-accelerates the electrons.

The discovery is exciting as it provides an insight into how the cosmic web really works. But the findings suggest current theories about particle acceleration in intergalactic space need to be revisited.

The research has been published in Science.