Remember that cigar-shaped interstellar object that whizzed through our Solar System last year? The cigar-shaped celestial body got a lot of attention when it was discovered last year, as it is the first known object that came from another solar system. Now, a study shows that the interstellar space explorer may be more comet-like than we thought from the beginning.

On October 19th, 2017, the Panoramic Survey Telescope and Rapid Response System-1 (Pan-STARRS-1) telescope in Hawaii announced the first-ever detection of an interstellar asteroid – I/2017 U1 (aka. ‘Oumuamua). Originally thought to be a comet, follow-up observations conducted by the European Southern Observatory (ESO) and others confirmed that ‘Oumuamua was actually a rocky body that had originated outside of our Solar System.

But a new study published in the journal Nature questions the assumption that it really was an asteroid or a comet. Since there are a couple of oddities to it being a comet, in particular, its unusual shape. A comet is usually formed by colliding with smaller objects and substances that assemble over time and this process should produce an elongated shape. 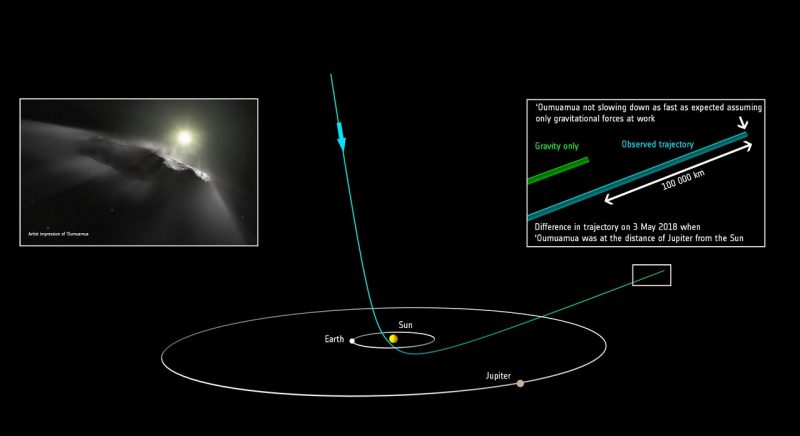 But the scientists behind the new Nature Study have reviewed observations from both ground and space-based observations and found that a certain outflow of gas in a typical comet would be needed to explain the path of the object as it traversed through our solar system.

The authors of the new study wites that ‘Oumuamua’ was venting material from its surface, typical for a comet. Solar heating is producing an effect called outgassing, and the material ejected from the object’s surface is creating a tiny amount of thrust.

So, if it isn’t an asteroid, nor a comet, what is it? The researchers made sure that the acceleration effect was not being caused by something else, they considered scenarios like solar wind, a collision with another object, its mass being different than calculated, and other known or suspected astrophysical phenomena. However, “these explanations are all either physically unrealistic or insufficient to explain the observed behavior,” write the authors in the study.

Also, the unlikely theory that ‘Oumuamua’ is an interstellar spaceship was rejected. The smooth and continuous change in speed is not typical for thrusters and the object is tumbling on all three axes, speaking against it is an artificial object.

Simply put, we aren’t able to define the object using any categories of celestial bodies available to us today.