Hydrogen is the most basic of all elements and is actually the most common element in the universe. The atom is made up of a single proton and a single electron. As such, it is very abundant, but seldom in its pure form. Instead, it is usually combined with other elements.

To separate hydrogen gas from its companion substances takes a lot of work, but it produces a powerful nearly clean source of energy. As a gas, it can be used in fuel cells to power engines.

In the transition to a fossil-free society, hydrogen is often mentioned as a promising alternative energy source. Particularly in steel production and for transportation in hydrogen fuel cell powered vehicles. The hope is also to use hydrogen as an energy storage for solar, wind, hydro, wave power etc. Energy stored in hydrogen to be easily accessible and used at a later time.

The positive aspects of using hydrogen as a fuel are many, it’s environmentally friendly, fuel efficient, readily available and clean. It is however very expensive and time-consuming to produce, making all the ‘pros’ irrelevant.

One method to produce hydrogen is electrolysis, by which a power source is used to separate the hydrogen from the oxygen in the water. The method, however, requires a lot of energy and often need expensive metals as catalysts. 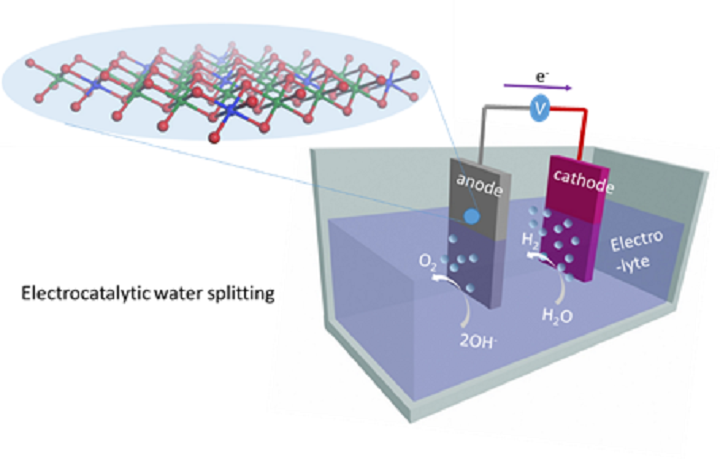 A new promising material gives hope that hydrogen can be produced cheaper in the future. Swedish researchers at the Royal Institute of Technology have shown that this new material is an effective and cheaper catalyst.

They experimented with this new material as a catalyst in electrolysis, separating hydrogen from oxygen in the water. The material is composed of nickel and vanadium. These elements are significantly cheaper than iridium and ruthenium, which are otherwise often used as catalysts.

This is the first time that the metal vanadium has been used for water oxidation, and it works very well according to the researchers. The new material is built in layers by which the nickel and vanadium are fused at the nanometer level.

The material allows for a large active surface where oxidation of water can be done. It also improves electron transfer within the material. The discovery increases the chances of inexpensive and efficient production of hydrogen on a large scale.

The research paper were recently published in the journal Nature.