Airbus want future aircraft to be catapulted into the air

In the future, you might be pushed away on vacation with a catapult. Aircraft manufacturer Airbus intends to replace heavy aircraft engines with a rail system that sends away airplanes into the air.

Aircraft manufacturer Airbus plans to push away future passenger aircraft using a catapult. The idea, presented in the company’s “Smarter Skies” report two years in the making, is part of the company’s vision for air traffic in 2050, will both reduce precious travel times and lead to less carbon dioxide emissions.

Catapulted into the air

Aircraft of today require enormous amounts of power to get the airplane up in the air, much more energy is used at the start than the rest of the flight.

To be able to lift, airplanes are equipped with large and heavy engines. However, by instead providing the necessary engine power at the airport, Airbus could construct more lightweight aircraft’s using significantly less fuel.

Airbus outlines a plan for aircraft to be mounted on a rail on a rolling catapult that pushes the aircraft at high speed and then shoots away. The catapult is powered by electric motors that receive power through renewable energy sources.

Today, airplanes rise in stages but the catapult causes the aircraft to directly ascend to the right altitude, which is both faster and significantly more energy efficient. The report says that a continuous “eco-climb” would cut noise and CO2 emissions, especially if renewable fuels were used, making the process even more eco-efficient.

The challenge is to find an acceleration level that is fit for passengers and efficient enough. The goal is for the climb to not expose passengers to greater g-forces than a roller coaster designed for children.

The aircraft will use predictive software to work out the most fuel-efficient route to its objective, and on more busy flight paths, aircraft would be coordinated to fly in formation to save fuel, just as birds do. Mentioning that flying in a V formation of 25 birds, each bird can achieve a reduction of induced drag by up to 65 percent and increase their range by 7 per cent. While efficiencies for commercial aircraft are not as great, they remain significant. 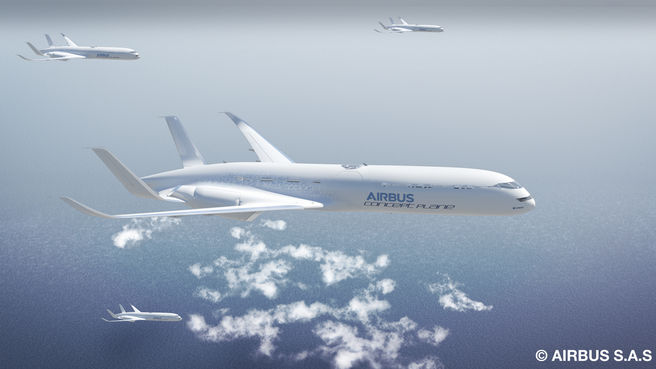 The report also outlines how future Aircraft can become totally recyclable, using interior fittings that are grown from vegetable matter and which will be self-cleaning and self-repairing. The bulkheads could be made of materials that can become transparent and the wings could change and adapt to different wind conditions for maximum efficiency.