U.S. in the top when autonomous car companies are ranked

Home /Technology/Vehicles/U.S. in the top when autonomous car companies are ranked
Advertisement

The companies General Motors, Ford, Daimler, and Renault-Nissan are at the top when companies are ranked in connection to making autonomous vehicles a very real future. 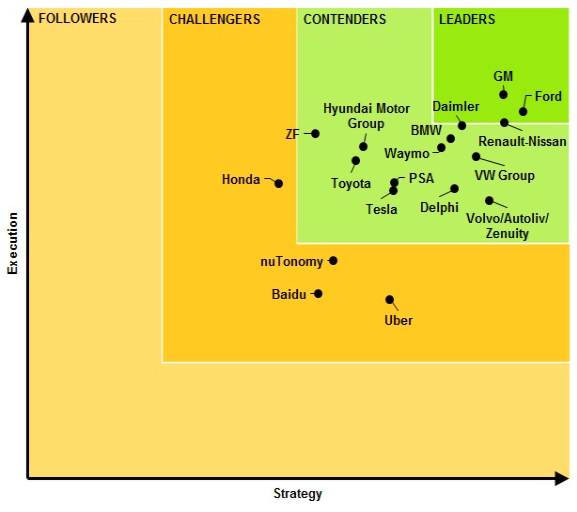 The Chicago-based market research company Navigant Research, with 2,500 employees, analyzed how 18 companies relate to each other in the pursuit of autonomous vehicles.

Navigant Research examined the companies on based on given parameters relating to performance and strategy. They were then placed in a matrix with execution on one scale and strategy on the other. Four different categories were defined: Leaders, contenders, challengers and followers.

The companies’ ability to perform on the market were evaluated based on the below parameters, taking into account geographical scope or lack of technical ability.

The company’s strategy was evaluated via the below parameters:

Every rated company develop complete systems that often include mobility solutions and Navigant research outlines a future when most people will use autonomous vehicles through mobility services, rather than individual ownership (like paying for Spotify instead of buying CDs).