Electricity investment overtakes oil and gas for the first time ever, IEA says

Global investment in electricity in 2016 exceeded oil and gas for the first time, the International Energy Agency report. 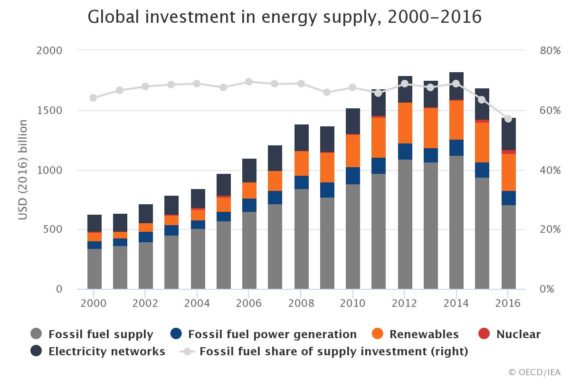 Investments in electricity surpassed those in oil and gas for the first time ever in 2016. At the same time, total energy investment fell for the second consecutive year, by 12 percent to 1.7 billion dollars compared to 2015. With global energy investments accounting for 2.2% of global gross domestic product (GDP).

Energy efficiency spending increased 9% to $231 billion, while spending on electricity networks increased by 6%. Oil and gas investments plunged 26 percent to $650 billion, down by over a quarter in 2016, and electricity generation slipped 5 percent. 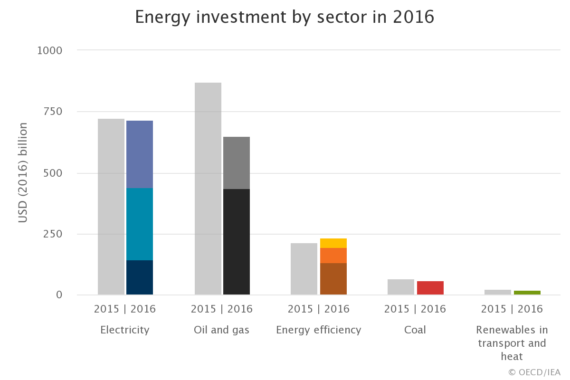 The overall dropoff in energy investments was primarily seen in the upstream oil and gas sector. According to Laszlo Varro, chief economist at the IEA, the decline is due to two things: Firstly, investments in oil have fallen in the footsteps of a pressured oil market. Secondly, technological advances have helped to reduce investment costs for both renewable energy and oil and gas.

“The reaction of the oil and gas industry to the prolonged period of low oil prices which was a period of harsh investment cuts; and technological progress which is reducing investment costs in both renewable power and in oil and gas,”

China was the largest market for energy investments in 2016, representing a global share of 21 percent, with the USA in second place. Energy investment in India jumped 7%, solidifying its position as the third-largest country.