The first human tools and technoglogy: Earlier than previously thought 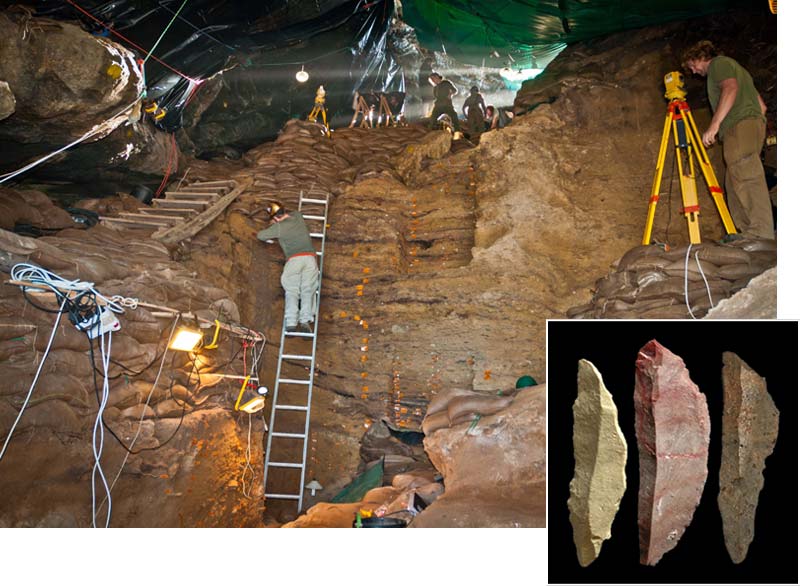 The results by this American research team led by paleontologist Curtis Marean of the Arizona State University has been published in the journal Nature. The tools found by the team has been dated to around 71,000 years ago.

The excavations were done in a cave at Pinnacle Point near Mossel Bay in the Southern Cape, South Africa. And has resulted in many findings consisting of a multitude of sharp stone tools, so-called “microliths”. These sharp stone tools were formed into thin knife-like blades and also arrow or spearheads. The latter is a speculation, though since it is hard to establish their definitive use. But the team speculate that some of the microliths were used as weapons attached to spear-throwers. Making these sharp tools very deadly indeed. And by making spears, the projectile could travel much faster and thereby hit its prey with much more force. Spears thrown with spear-throwers can reach speeds of over 150 km/h, and even faster.

According to our knowledge, the population at Pinnacle Point had a real advantage over those who only used hand weapons in close contact with prey or enemies. This fact must have given them a considerable advantage and edge for hunting big prey. Making it both easier and less risky to hunt large potentially dangerous prey, such as mammoth or buffalo.

The process of creating these tools was by its time relatively sophisticated and complex. Implicating multiple steps in creation. First, the rock was separated as silcrete, and then it was heat-treated to make it easier to flake into bits. Then, they would have used a larger rock to flake off sharp slivers of rock, blunted them on one side and used them as blades on composite weapons.

Previous studies have implied that the use of this technology has been much later in South Africa. But the findings in Pinnacle Point cave, however, indicate that the way of producing these tools has passed down from generation to generation for at least 71,000 years.

Team leader, Curtis Marean said that “people have consistently made those tools in the same way in an almost unimaginably long period of time”.

Meeting the First Europeans: The Neanderthals

These findings coincide with other recent discoveries that push back the arrival of modern humans to Europe much earlier than previously thought. It was thought that modern humans arrived in Europe about 30,000 BCE. However, recent evidence shows that we have been in Europe for at least 45,000 years, coexisting with Neanderthals for at least a millennia.

And in the context of this, according to Curtis Marean, these early immigrants from Africa had a major advantage compared to other hominids by having access to spear-throwing technology. As he said; “They could go on a knockout, no enemy was safe”. Marean adds that the spear points the Neanderthals used were too unwieldy and heavy to be thrown. “If you come up against a competitor that has a spear thrower, you’re at a distinct disadvantage,”. Also, the Neanderthals probably used their spears not by throwing, but rather by thrusting the spear into an animal, still holding it.

Paleoanthropologist John Shea at Stony Brook University in New York is not so sure that these weapons were used against other hominid populations. Since it is not established that they were brought into Europe, “Microliths seem to show up much later than first appearance dates for Homo sapiens fossils in most parts of Eurasia,” he said.

Also, the estimation of Neanderthal capacity has undergone major changes in recent time, they have been reevaluated in all aspects of artistry, the capacity of speech and language, burrowing their dead etc. Their archaeological record is also incomplete, and more data is needed. Also, although modern humans eventually prevailed and the Neanderthals evidently died out as a species, they did not do so entirely, their DNA lives on in many humans today outside Africa.