An Implant That Silences Tinnitus 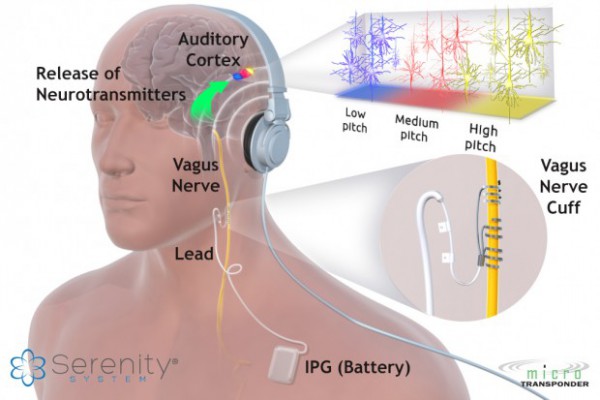 Tinnitus is the medical term for hearing imaginary noises without any “real” external source of the sounds. It is not a disease but a medical condition that can result from a wide range of causes, for example, exposure to very high noise, wax build-up or infections in the ear.

Now an American firm has developed an implant that stimulates a nerve in the afflicted neck. This stimulus can help remove the perceived phantom noises.

It is the firm American Micro Transponder in Dallas that has developed the implant. The implant sends mild electrical impulses to a nerve in the neck, called the vagus nerve. These electrical impulses activate an area of the brain which has been proven important for hearing.

At the same time as this implant stimulates this nerve with electrical impulses, the person is simultaneously listening to an audio sequence of tones which are close to the frequency of the tinnitus noises. With this combination of stimulus, the brain can be restored and these false sounds are filtered out and disappear.

The method was first tested on rats with good results. It was then tested on humans last year. The human trials consisted of ten participants who received two and a half hours of daily regular stimulus, for a total period of 20 days.

The treatment was proven effective for half of the participants. The other half were however on medication at the time, which the researchers believes may have distorted the results.

Another study will soon commence with a total of 30 patients, who will each receive this treatment for six weeks. If this test study is also proven successful, the treatment has good chances of finding its way to the market eventually.

An Artificial Enzyme Makes Fuel Out of Water
A Dreadnought: An Enormous Dinosaur Discovered