US researchers have made some progress in developing a viable urine test to find prostate cancer. A urine test would …

NASA’s planet-hunting space-based telescope TESS has found its first potentially habitable exoplanet the size of Earth orbiting a star about 100 light-years from Earth, according to the agency.

It is the first Earth-size planet discovered by TESS in its star’s habitable zone and it may mean that the planet has liquid water on its surface.

Similar planets have been discovered before, notably by the Kepler Space Telescope, which has since retired. TESS is a recent newcomer in our search for exoplanets, launched in 2018.

TESS makes use of the so-called transit method, whereby the telescope focuses on one area of the sky to detect whether objects – planets – pass in front of stars, which causes a temporary drop in the stars’ luminosity. This allows TESS to infer the presence of a planet, its size, and orbit.

Another first for the Transiting Exoplanet Survey Satellite is its discovery of a world orbiting two stars, evoking the planet Tatooine from Star Wars.

The exoplanet TOI 700 d is located just 101.5 light-years from Earth, making it a good candidate for follow-up observations by other instruments.

TOI 700 d is orbiting a star called TOI 700, a cool “M dwarf” star about 40% of the Sun’s mass and size, and about half, it’s surface temperature, TOI 700 shows no sign of harmful “stellar flares.” and that means that any planets in orbit don’t get frequent blasts of deadly radiation that would almost certainly make life impossible.

Members of the TESS team presented this research at a meeting of the American Astronomical Society in Hawaii on 6 January. TOI 700 d is one of the best targets for further observations to learn whether it really does have the right conditions for life, said Emily Gilbert at the University of Chicago in Illinois.

Gabrielle Engelmann-Suissa at NASA’s Goddard Space Flight Center in Maryland and her colleagues ran 20 simulations of possible conditions on the surface and in the potential atmosphere of TOI 700 d.

“We find across all our 20 simulations that TOI 700 is a robust candidate for habitability,”

All the simulations assumed that TOI 700 d was rocky and had an atmosphere.

“The question which remains is, is this planet rocky like it would be in our solar system, or is it like a mini-Neptune?”

– Joseph Rodriguez at the Harvard-Smithsonian Center for Astrophysics in Massachusetts.

TOI 700 d is about 20 percent larger than Earth and orbits its star in 37 days. It receives 86 percent of the energy that Earth receives from the Sun. A major difference compared to Earth is that the planet is tidally locked to TOI 700, meaning that one side always faces the star, in the same way, that Earthlings never see the “dark side” of the Moon.

The simulations incorporated this synchronous rotation and one model shows us how one side of the planet was constantly covered in clouds. Another simulation predicted an all-land world, where winds flow from the planet’s dark side to its light one.

The TOI 700 planetary system consists of three planets as we know of: TOI 700 b is the innermost planet and is almost exactly Earth-size. TOI 700 c is the middle planet 2.6 times larger than Earth and orbits every 16 days and is likely a gas-dominated world. TOI 700 d: the outermost planet in the system, it’s the only detected planet in the habitable zone. It’s probably rocky, it’s just 20% larger than Earth.

Multiple astronomers will observe the planet with other instruments, in order to obtain new data that may match one of NASA’s models. Future missions—such as the James Webb Space Telescope (JWST)—may be able to identify whether the planets have atmospheres, and also determine their compositions.

Increased Chances of Finding Life on the Trappist 1 Planets 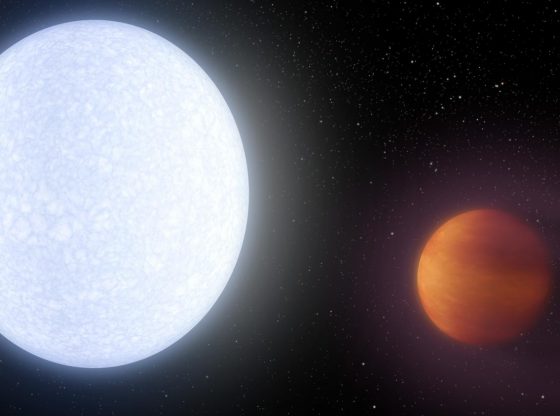